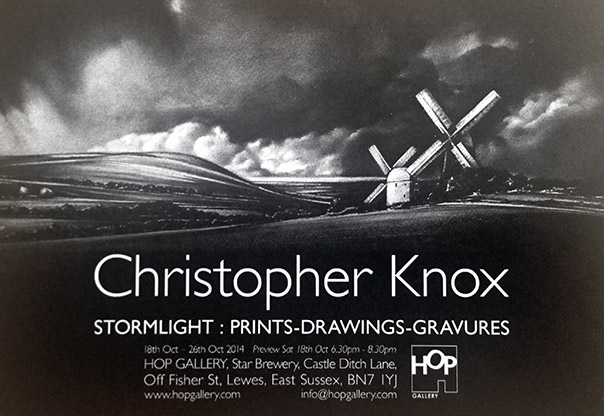 From 18 October 2014, in Stormlight, his first solo exhibition at the Hop Gallery in Lewes, Christopher will exhibit 40 new works that include drawings, intaglio prints and photopolymer gravures.

Featuring exclusively British landscapes, the show will have a dual focus — half on locations in East Sussex and half influenced by the wilds of the Northumbrian coast. It will feature not only the finished pieces, but will also give visitors an insight into Chris’ process as he displays original sketches, prep work and transparencies together with a model lightbox to demonstrate his techniques.

As Chris says, “Most people like to see sketches and plates so I’ve been working with a local model builder, Dave Thirlwell to build a model to help me to demonstrate my process. Because of the way I use an ultraviolet lightbox, we’ve really gone over the top for this exhibition, building a case to hold a light source with a transparency which will help to explain the projection.

There are quite a few people in and around Lewes who are from the north east originally — in fact they’re 6th or 7th generation which I was surprised about. So, I’m pleased to be showing work locally at this, my first one–man show, from the two locations that have inspired me so much.”

Preview and meet the artist